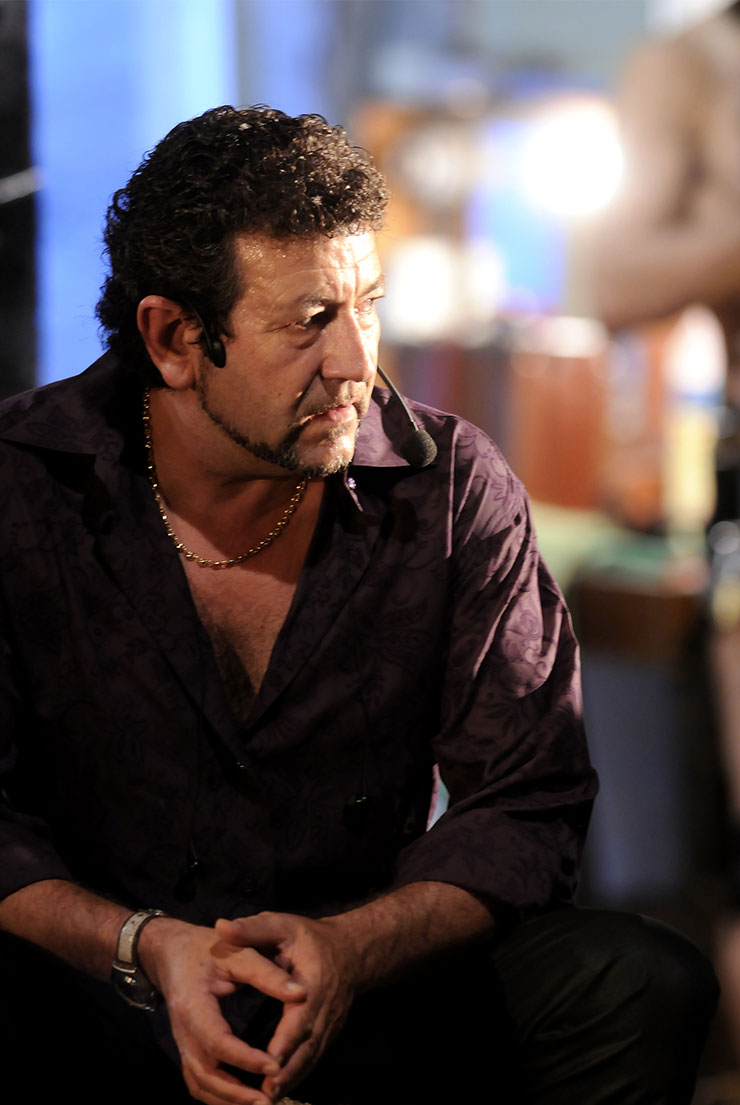 Originally from Huéscar (province of Grenada), he grew up in rural Andalusia amidst the world of Flamenco. He is currently the artist flamenco recognized and one of the references in the flamenco world. He is self-taught : he has inherited his gift for “el Cante” from his ancestors.

For a long time, he frequented the Flamenco Grenadin world and rubbed shoulders with the gypsy dancer Juan Ramirez. Then he performed in his native land, in the Balearic Islands (part 1 of Ana Reverte) and in the region of Alicante until 1991 when he moved to France.

Since then his group has been constantly evolving as he discovers and surrounds himself with new artists and young French and Andalusian talent.

In 1994 he took part in the French film “Dis-moi oui’ by Alexandre Arcady.

He was also the one who initiated the Andalusian Festival organised by the Andalouse Alhambra Association in Avignon and the Vaucluse Region.

Luis de la Carrasca has also composed music for plays in which he has directed the parts with flamenco music :

"Carmen Flamenco" from the work of Bizet and Mérimée

« Yerma » adaptation of the novel of Federico García Lorca

adaptation of the novel « Or I’ll dress you in mourning… » by Dominique Lapierre and Larry Collins
Direction : Prosper Diss
An Alhambra and Sablier Theatre coproduction created in March 2010 for the 9th Andalusian Festival.

This is the faithful story of the toreo “El Cordobes” ans his rise to fame. From poverty to glory, the artists follow in El Cordobes’ footsteps and will tell, sing and dance to narrate the tragic and passionate story of modern Sapin.

This is a Cid completely faithfull to his roots ie Spain, and more precisely Andalusia where Corneille sets the story.

A play inspired by two novels by Frederico García Lorca :
“The Shoemaker’s Prodigious Wife” and “Blood Wedding”.
Direction : Prosper Diss
A 2007 Creation by the Sablier Theatre

Driven by the Flamenco music and dance, this adventure leads two youg actors to know Frederico Garcia Lorca the man, the poet, the playwright, the musician… It is such a rich journey that both He and She eventually recognized themselves in Frederic!

This show springs from an enchanting meeting in 2006 between Luis de la Carrasca – Cie Flamenco Vivo and the Improvisation Company from Lyon. The alchemy led to the co-creation of an improvisation show.

A unique improvisation show in which each artist assist each other to celebrate the fusion of flamenco and theatre improvisation.

In this adaptation of a conference by Federico García Lorca, the words of the Andalusian poet are transcended by the Flamenco music, singing and dancing.

A 1997 creation in co-production with the Balcon Theatre.